The excavator is the main machine for mechanized construction of earth and stone works. Due to its high earthmoving efficiency and large output, it can be used in various soils (and crushed rocks) and is widely used in construction.

Although excavators are very common in large and small construction sites, the classification of excavators can be said to be varied. In many cases, improper excavators may even cause accidents. So what are the specific types of excavators?

The classification of excavators can be divided according to the number of buckets, structural characteristics, operating power, running gear, powerplant, bucket capacity and general conditions. Although there are many types of excavators, the single bucket excavator is the most commonly used machine in excavation machinery, so the classification of the single bucket excavator is highlighted here.

(1) According to the working device of the excavator, it can be divided into four types: positive shovel, back shovel, dragline and grab shovel.

The bucket of the front shovel is mounted on the end of the stick and supported by the boom. The excavation movement is from the bottom to the top, and the tip of the bucket is always curved. It is suitable for excavating the upper surface above the stop surface.

The bucket of the backhoe excavator is also connected with the stick. The excavation action is usually from top to bottom, and the tooth track is circular arc, which is suitable for excavating the seven soils below the stop surface. The bucket of the backhoe excavator moves along the lower edge of the boom. When the boom is placed in the circumferential position, the tip of the bucket tip is suitable, so that a straight excavation surface can be obtained, which is suitable for excavating slopes, side grooves or leveling. site.

The bucket of the shovel excavator is hinged by two or more shovel flaps. When the shovel flap is opened, when the shovel is thrown on the excavation surface, the edge of the flap is cut into the soil, and the shovel is grasped by a steel cable or a hydraulic cylinder, and the shovel is grasped. soil. Unload the soil by loosening the flap. It is used for excavation in foundation pits or underwater, and has a large excavation depth. The small and medium-sized excavators commonly used in earthwork can be replaced and replaced with different buckets. They can be used for different operations and can be converted into cranes, pile drivers, earth-moving machines, etc. excavator. Mining or mining excavators are generally equipped with only one working device for single-operation, so it is called an excavator. 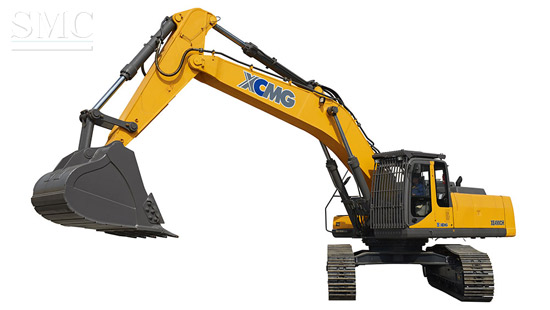 (2) According to the way of walking, it is divided into two types: crawler type and tire type.

The bucket is placed on the stop surface by the arm cylinder or the bucket hydraulic cylinder, and the arc is moved, excavated and loaded, and then the starting arm is lifted, and the swing motor is used to steer the unloading point, and the bucket is unloaded. The whole machine is driven by the left and right hydraulic motors, and the motor is reversed and can be moved in, out or turned. Tire walking is also driven by the engine through the gearbox, main drive shaft and differential, but the mechanism is complex.

Try also our We Chat by scanning the QR code below.